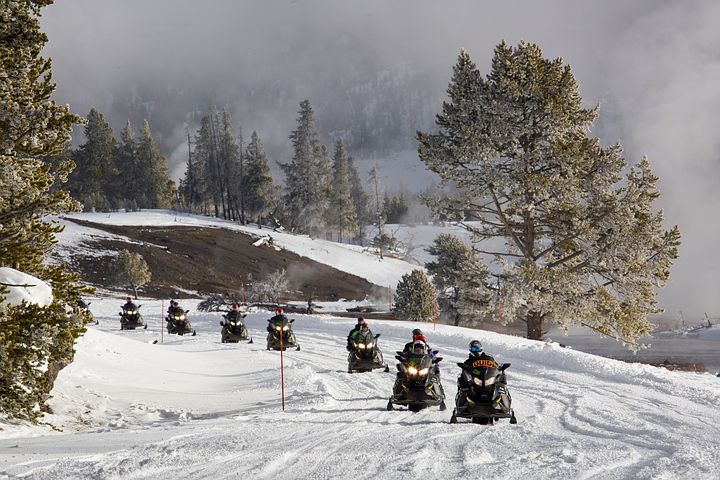 My brother and sister-in-law love to snowmobile. I’ve never really gotten the whole winter sports culture, but I’ve heard you can’t mock what you haven’t tried, so I’ll assume there is something awesome about it.

They tell me on a good day, the restaurant parking lots in northern Wisconsin are empty of cars but full of snowmobiles. It all just sounds cold to me. Except for the restaurant part. I’m always up for going out to eat.

It turns out every once in awhile, angels trade in their wings for a day on the snow. At least that’s how it must have felt to the woman who was traveling by car on slippery roads to see her mother.

Charity Bitzer sent in this story about her daughter:

“About a year ago, my daughter and grandchildren were on their way to Brainerd, Minn., when she came across what she thought was a live animal in the road. There had been a massive snow recently, so in braking, her little car slid into the ditch. She got out and assessed the situation.

“It was a gravel road with no traffic, there were no neighbors in close proximity and Dad was 40-50 minutes away. It would have been quite a hike back to the house with two small children in tow, so she made a couple of calls to see if help was nearby. That was when she heard them.

“Snowmobiles. On the other side of the barb wire fence, three snowmobilers pulled up and said, ‘Can we help?’

“My daughter, the ever most considerate person, nearly said no because she was concerned they would have to go a distance to get around the fence. ‘No problem,’ they said, ‘we can climb through.’ And they did. Then they literally picked up her car and set it on the road.

“My daughter’s embarrassment level was pretty high. Not only did she realize she slid into the ditch for an already dead animal, but then she realized she had no cash to pay these people for their efforts. The snowmobilers weren’t concerned at all. In fact, they said, ‘What makes you think we would take money from you? We’re happy to help!’

“They waved goodbye to the wide-eyed children, climbed back through the fence and went on their way. What a simple but significant act of random kindness. It made a huge impression on the heart of my daughter, who apparently brakes for animals and carcasses, but it also made an impression on the hearts of my sweet grandchildren.”

Thanks for your letter, Charity. I get the feeling your daughter is still taking a playful ribbing for her compassion toward animals. Cut her some slack — I’m grateful to know there are such kindhearted people in the world.

It sounds like snowmobilers are some pretty special people, too. They also sound awfully strong. The next time I need my car picked up and put back onto the road, I’ll know who to call.