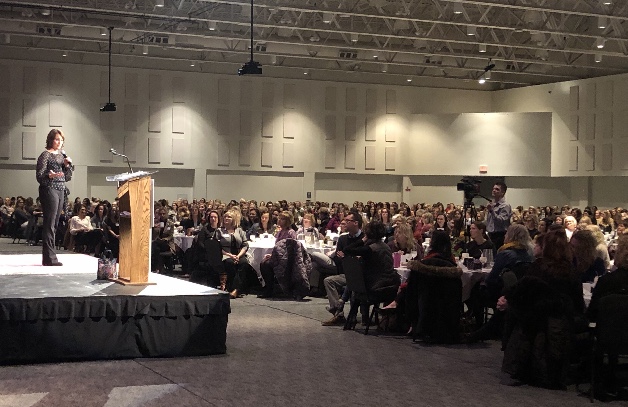 The coolest thing happened the other day. I got an email.

Now maybe you’re thinking, “Hey Nic, I get emails all the time. It’s really not that cool.”

Well this email was a follow up from the ”In Her Shoes” Dress for Success event I spoke at in Sioux Falls, SD several weeks ago.

Just before I got up to speak, two clients, the Metzger sisters, shared their gratitude for the help Dress for Success had given them with mentorship and other programming when they moved to town. The Metzger sisters looked almost like twins in their matching t-shirts that said, “Use your power to empower.”

The moment they started talking, everyone in the room immediately fell in love with them. When they finished talking, the mic was mine.

Be warned, I happen to be a little sassy and a little bossy when someone hands me a mic.

Then I asked the audience if they know there is actually a third sister who lives in Iowa but desperately wants to find a job in Sioux Falls so she can join her sisters. (Side note, she has blond hair too, so the “twins” actually look like triplets.)

At this point, I get bossy. “There are 1000 powerful women in this room. I’m certain one of you can use your power to empower this young woman and hire her so she can move to Sioux Falls.”

After that, I backed off and carried on with my message.

Fast-forward a few weeks and join me at my email inbox. Out of the blue, I got a message from a woman in Sioux Falls saying her company was the lucky one who got to hire the third Metzger sister!

It took my breath away! Best. Email. Ever.

Each one of us has a wealth of power and influence, but we downplay it and tell ourselves nobody’s listening or it’s not our place to interfere.

I hesitated before challenging the audience to hire the third Metzger sister because of those exact thoughts. What a missed opportunity that would have been.

Someone used their power to empower me just the other day. A woman who goes by @lightwecreate on Instagram was commenting on a post by Maria Shriver. She asked Maria if she knew about me.

Wait. What? Why would Maria Shriver know about me? She doesn’t. But @lightwecreate used her influence to suggest we connect.

I’m not expecting Maria to call and ask me out for coffee, but my cup is overflowing that someone thinks my work is important enough to publicly call it out.

You have power. Please don’t hide it or diminish it. Look around and see who needs a word of encouragement or a reference or a bit of your time as they learn a new task.

Then use your power to empower.