I broke my 33 year sting-free streak this weekend… The last time I was stung, I was 6 years old. This time it wasn’t a bee that got me, it was a big black wasp.

I put my hand down on a railing at an outdoor restaurant Friday night and promptly lifted it back up again with what my husband described as a “hurt animal yelp.” He actually said I sounded like a dog, but whatever…

It hurt and itched like the dickens, but it wasn’t until after dinner that we realized I may be allergic to whatever venom that little beast had used to attack me.

My whole hand started to resemble a balloon and it was beginning to travel up my arm. 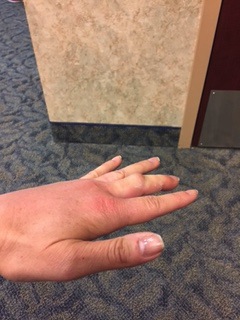 Off we went to Urgent Care.

We, as Team Phillips, probably do too much as a family, so when they called me into the patient room, we all went together.

The doctor took one quick look and told me to drop my drawers for a steroid shot in the rear end.

When the nurse pulled out the needle, I pulled out my camera. The look on my children’s faces were priceless. My 10 year old daughter thought this whole event was hysterical, my 4 year old son was totally bewildered, and my husband who’s not a big fan of needles just looked away. 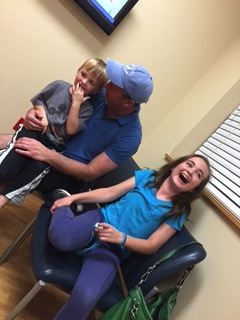 Humiliating? A little. Painful? Definitely. But I have to say, we have never laughed so hard together as a family. Sometimes the best memory makers in life are the ones that sneak up on you.