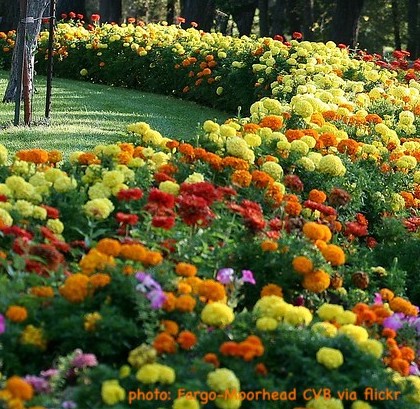 Did you know there is a North Dakota “Best for Last” club? I learned about it when some friends, who are visiting all 50 states, decided to swing by for a visit.

They are on their way to Fargo to set foot in their final state. You might say they saved the “best for last.” I hope they get a T-shirt.

I’ve heard people describe Fargo as the “best place to live that you’d never want to visit.” I think they mean you wouldn’t want to visit in December. Or January. Or February. Or maybe even March. You get the point.

But if you catch North Dakota, and specifically Fargo, at the right time of year, it is stunningly beautiful. That’s because people work hard to make it that way.

I recently got a letter from a woman who works at Concordia College in Moorhead. She says she has come to greatly admire someone who brings beauty to the region.

“As summer seems to be wrapping up, I want to share some info about Diann Fischer, the ‘flower lady’ who maintains all of the blooms at Lindenwood Park (in Fargo). Diann is at Lindenwood virtually every day, all summer, taking care of flowers, enhancing the park and its grand entrance.

“She also works full time in the bookstore at Concordia College and in her free time she is a Bible study discussion leader at her church, Bethel Evangelical in Fargo.

“Diann designs all of Lindenwood’s flower beds, plants every flower, makes sure they are watered, weeds them, fertilizes them, keeps the bugs off them, pulls them out after the frost and starts planning next year’s beds.

“Two days after she graduated from Fargo’s Shanley High School in 1975, she was hired by the district. She initially worked with a crew which planted flowers all around Fargo. But after three years, she asked for, and got, Lindenwood for herself.

“Diann majored in physical education, with minors in business, health and coaching at North Dakota State University, where she competed in track and basketball and, in 1975, was among the first 10 women there to gain athletic scholarships.

“She was the assistant girls basketball coach at Shanley for two years while attending NDSU, then was the head coach of girls volleyball and cross country and an assistant coach of basketball and track at Fargo North High School for 15 years.

“She’s a runner and has run many marathons and logged more than 70,000 running miles. She once had a streak in which she ran every day (every day!) for nine years, two months and 19 days. Inflammation of her foot tendons forced her to wear a cast, ending her streak of consecutive runs.

“She has back problems, so much so that her doctor told her to stop running and quit the park job. She gave up running, but she wouldn’t give up her flowers.”

Whether you call North Dakota home or it is simply a stop on your list of states, I hope you’ll swing by Lindenwood Park and see for yourself the beauty Diann is creating with her kindness.