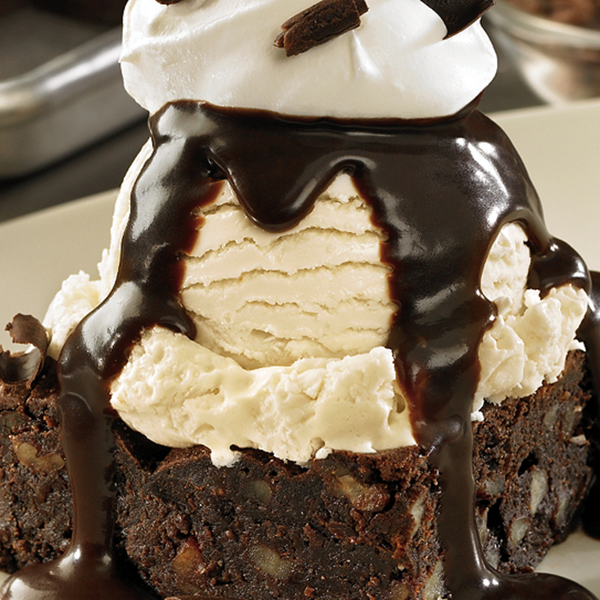 Did you know Outback Steakhouse has a gluten-free brownie they serve with a big scoop of vanilla ice cream covered with hot chocolate sauce, whipped cream and slices of deep rich chocolate?

The closest to Aberdeen is three hours away, so when I saw one next to my hotel last night, I was totally in.

Actually I was out. Meaning I was too lazy to get out of the car, so I called my order in and the server brought it out for me.

I’m in Goldsboro, North Carolina to speak at an event for breast cancer survivors and the other amazing women who make up this community. I flew in yesterday and it was dark when I arrived, so I was a little road weary and ready to hit the sheets at the Holiday Inn.

The Outback guy comes up to the car with a big bag and a big smile and says, “Are you Nicole?”

I thought he was teasing me. I thought it was part of some new Outback Steakhouse shtick. I also thought he had a terrific accent, but he was really blowing it if he thought that was Australian.

I smiled back and said, “Yes I am!” Then I waited for some, “Well G’Day Mate!” phrase that never came. As he continued to talk about my order, I realized he wasn’t trying to play some part, he just had a beautiful Southern accent that I wasn’t used to hearing because I’m seldom down South.

As I sat in bed and ate WAY too much of my dessert, I was struck by how caught up I am in my own little world. It’s hard to really know people when we never see them face to face. We see each other’s opinions on Facebook and Twitter. We see each other’s actions on the news. We (or maybe I should say I) fill in the blanks and decide whether they are in the “Same” or “Different” column.

I hate to think someone would decide I’m worthy of friendship based on the house I live in, the team my husband coaches or the way I pronounce my “A’s” thanks to my Wisconsin upbringing.

Today, along with trying to walk off that amazing dessert, I vow to really see people, listen to people and to remember that unless I’ve hugged someone, I don’t really know them well enough to formulate an opinion. Maybe you’ll join me?

By the way, in case you’re wondering, the dessert is called “Thunder from Down Under.” Worth it. Totally. Get two spoons so you can share (with me).